Nerve cells (neurons) in the brain. In Alzheimer’s, there are microscopic ‘plaques’ and ‘tangles’ between and within brain cells.
While they cannot be seen or tested in the living brain affected by Alzheimer’s disease, postmortem/autopsy will always show tiny inclusions in the nerve tissue, called plaques and tangles:3,4
• Plaques are found between the dying cells in the brain – from the build-up of a protein called beta-amyloid (you may hear the term “amyloid plaques”).
• The tangles are within the brain neurons – from a disintegration of another protein, called tau.
For a detailed visualization of what goes on in the Alzheimer’s disease process, progressing from the normal brain to increasing dementia changes, the Alzheimer’s Association has produced a journey of 16 slides. See the illustrations: Inside the brain: an interactive tour.
The abnormal protein clumps, inclusions, in the brain tissue are always present with the disease, but there could be another underlying process that is actually causing the Alzheimer’s – scientists are not yet sure.3
This sort of change in brain nerves is also witnessed in other disorders,3 and researchers want to find out more than just that there are protein abnormalities – they also want to know how these develop so that a cure or prevention might be discovered.
Researchers do not fully understand why the changes that lead to Alzheimer’s disease occur. Several different factors are believed to be involved. Risk factors for developing the condition include aging, a family history of Alzheimer’s, and carrying certain genes.
Symptoms of Alzheimer’s disease
The information in this section connects closely to some of that about tests and diagnosis below because symptoms noticed by patients, or people close to them, are exactly the same signs that healthcare professionals look for during testing.
Symptoms can be diagnosed at any stage of Alzheimer’s dementia and the progression through the stages of the disease is monitored after an initial diagnosis, too, when the developing symptoms dictate how care is managed.
Of course, the very nature of the symptoms can be confusing for both a patient and the people around them, with different levels of severity. For this reason, and because symptoms could signal any of a number of diagnoses, it is always worthwhile seeing a doctor.
For doctors to make an initial diagnosis of Alzheimer’s disease, they must first be satisfied that there is dementia – guidelines spell out what dementia consists of. It involves cognitive or behavioral symptoms that show a decline from previous levels of “functioning and performing” and interfere with ability “to function at work or at usual activities.”11
The cognitive decline is in at least TWO of the five symptom areas listed below (from guidelines jointly produced by the National Institute on Aging and the Alzheimer’s Association):11
1. Worsened ability to take in and remember new information, for example:
• “Repetitive questions or conversations
• Misplacing personal belongings
• Forgetting events or appointments
• Getting lost on a familiar route.”
2. Impairments to reasoning, complex tasking, exercising judgment:
• “Poor understanding of safety risks
• Inability to manage finances
• Poor decision-making ability
• Inability to plan complex or sequential activities.”
3. Impaired visuospatial abilities (but not, for example, due to eye sight problems):
• “Inability to recognize faces or common objects or to find objects in direct view
• Inability to operate simple implements, or orient clothing to the body.”
4. Impaired speaking, reading and writing:
• “Difficulty thinking of common words while speaking, hesitations
• Speech, spelling, and writing errors.”
5. Changes in personality and behavior, for example:
• Out-of-character mood changes, including agitation; less interest, motivation or initiative; apathy; social withdrawal
• Loss of empathy
• Compulsive, obsessive or socially unacceptable behavior.
Once the number and severity of these example symptoms confirm dementia, the best certainty that they are because of Alzheimer’s disease is given by:
• A gradual onset “over months to years” rather than hours or days (the case with some other problems)
• A marked worsening of the individual person’s normal level of cognition in particular areas.11
The most common presentation marking Alzheimer’s dementia is where symptoms of memory loss are the most prominent, especially in the area of learning and recalling new information. But the initial presentation can also be one of mainly language problems, in which case the greatest symptom is struggling to find the right words.11
If visuospatial deficits are most prominent, meanwhile, these would include inability to recognize objects and faces, to comprehend separate parts of a scene at once (simultanagnosia), and a type of difficulty with reading text (alexia). Finally, the most prominent deficits in “executive dysfunction” would be to do with reasoning, judgment and problem-solving.11
Stages of Alzheimer’s disease
The progression of Alzheimer’s can be broken down into three basic stages:12
• Preclinical (no signs or symptoms yet)
• Mild cognitive impairment
• Dementia.
The Alzheimer’s Association has broken this down further, describing seven stages along a continuum of cognitive decline based on symptom severity – from a state of no impairment, through mild and moderate decline, and eventually reaching “very severe decline.”
The association has published the seven stages online.13 It is not usually until stage four that a diagnosis is clear – here it is called mild or early-stage Alzheimer’s disease, and “a careful medical interview should be able to detect clear-cut symptoms in several areas.”
How common is Alzheimer’s disease? 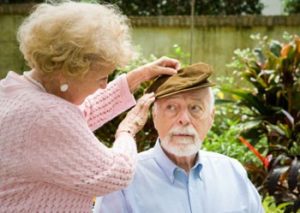 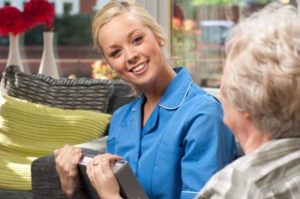 America’s national plan sets out to improve the quality of care and support for people with Alzheimer’s disease and their families.
There is no known cure for Alzheimer’s disease – the death of brain cells in the dementia cannot be halted or reversed.
There is, however, much backing for therapeutic interventions to help people live with Alzheimer’s disease more ably.2,21
The Alzheimer’s Association includes the following as important elements of dementia care:22
• Effective management of any conditions occurring alongside the Alzheimer’s
• Activities and/or programs of adult day care
• Support groups and services.
America has created a national plan to address Alzheimer’s disease, making it a medical priority for the country.
In January 2011, President Obama signed the National Alzheimer’s Project Act into law, stating:
“Alzheimer’s disease burdens an increasing number of our nation’s elders and their families, and it is essential that we confront the challenge it poses to our public health.”
Along with an aim to improve research into prevention and treatment, the goals of the plan also include measures for present interventions:23
• “Enhance care quality and efficiency
• Expand supports for people with Alzheimer’s disease and their families, and
• Enhance public awareness and engagement.”
Drug therapy
There are no disease-modifying drugs available for Alzheimer’s disease but some options may reduce its symptoms and help improve quality of life. There are four drugs in a class called cholinesterase inhibitor approved for symptomatic relief in the US:24
• Donepezil (brand name Aricept)
• Alantamine (Reminyl)
• Rivastigmine (Exelon)
• Tacrine (Cognex).
A different kind of drug, memantine (Namenda), an NMDA receptor antagonist, may also be used, alone or in combination with a cholinesterase inhibitor.24
Other therapy
As with other types of dementia and neurodegenerative disease, a major part of therapy for patients with Alzheimer’s comes from the support given by healthcare workers to provide dementia quality-of-life care, which becomes more important as needs increase with declining independence.
Recent developments in treatment and prevention from MNT news
Alzheimer’s treatment clue found in brain inflammation
Until recently, scientists thought Alzheimer’s disease disturbed the immune system – but a new study of mice adds to mounting evidence that it could be inflammation in the brain that drives Alzheimer’s. It suggests blocking a protein that regulates immune cells could be a way to stop the brain-wasting disease.
Keep moving to halve the risk of Alzheimer’s
A new study, published in the Journal of Alzheimer’s Disease, finds that any kind of exercise can improve brain volume and cut the risk of Alzheimer’s disease by 50%.
Blueberries could be used to fight Alzheimer’s, researchers suggest
Blueberries are a popular fruit, easily added to cereals, salads and desserts or eaten as a sweet treat in their own right. They are also known by some as a “superfood,” containing a wide variety of nutrients that offer protection against conditions such as cancer and heart disease. Now, researchers believe that they may have a part to play in the fight against Alzheimer’s disease.
‘Lost’ memories retrieved in mice with early Alzheimer’s
It may one day be possible to restore memories for people with early Alzheimer’s, according to a new study published in Nature, in which researchers reveal how they did just that in mice with early symptoms of the disease.
Implantable capsule shows promise for Alzheimer’s prevention
There is currently no way to prevent or slow Alzheimer’s disease, but a new study details the creation of an implantable capsule that researchers say could stop the condition in its tracks.
Prevention
There is a lot of research into risk factors associated with Alzheimer’s disease, so there may be lifestyle measures we can take to potentially reduce our risk and enjoy a healthier life more generally. Medical News Today has a page compiling ideas from researchers on how to prevent Alzheimer’s disease and dementia – including information about heart health, diet, exercise and keeping an active brain